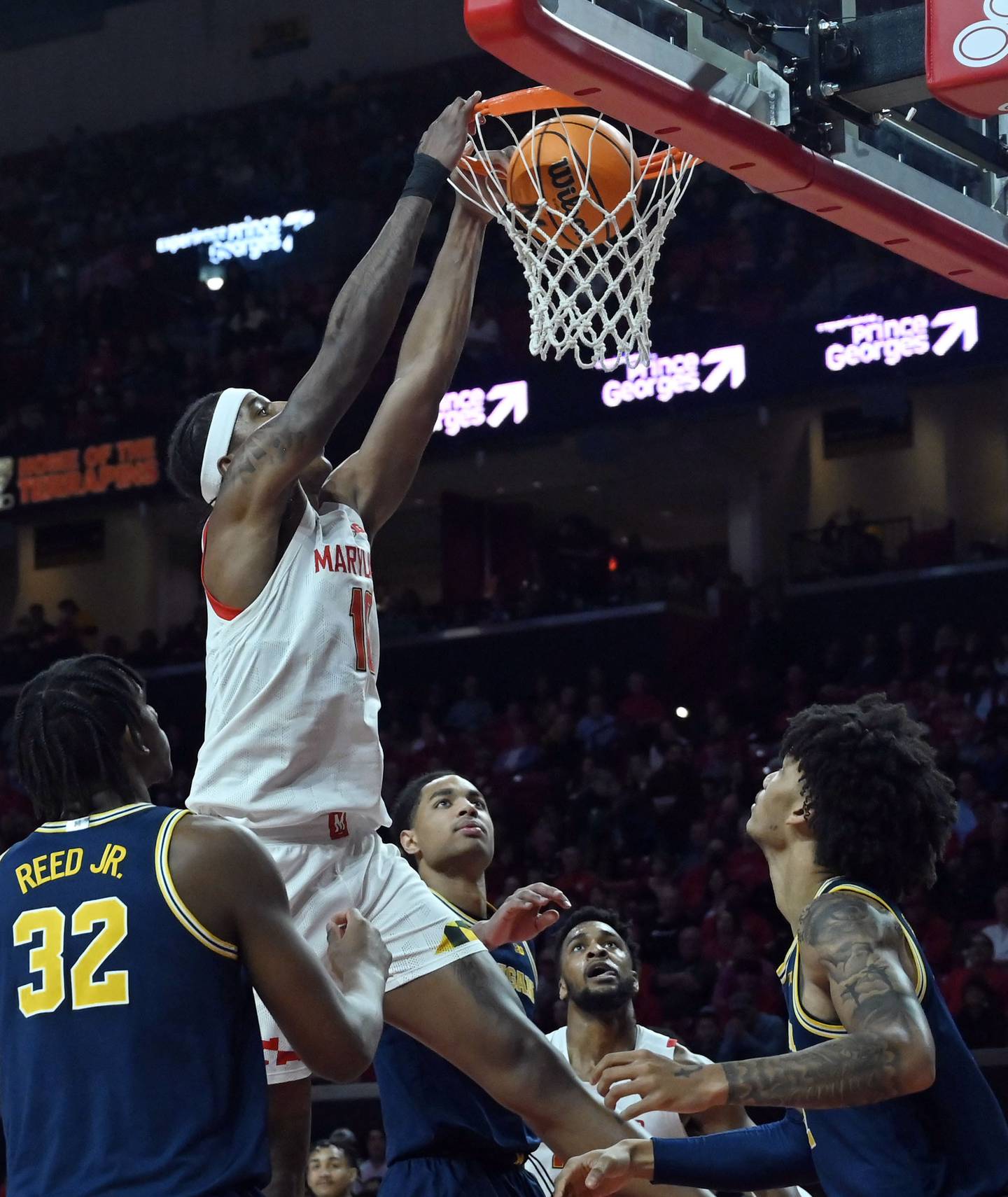 COLLEGE PARK — Maryland men’s basketball has won two of its past four games, and it has nothing to do with outside shooting.

In the beginning of the season, first-year coach Kevin Willard’s trigger-happy approach of taking a ton of 3-pointers did more harm than good. The majority of the Terps’ losses featured poor shooting from beyond the arc, leading to long scoring droughts that opponents took advantage of.

Lately, Maryland has shown a commitment to attacking the basket, and it has paid off. The Terps have scored 55.6% of their points from inside the paint over the past four games, including more than 40 points in wins over Ohio State and Michigan. Against the Buckeyes, Maryland scored 18 points off layups in the first 10 minutes of the second half to take a 60-46 advantage.

“It’s something we’ve talked a lot about as a team,” Willard said. “We started the year, [taking] a lot of threes. I’d still like to take more than 15 threes [per game], but I think understanding that we got to be a little bit more aggressive in getting the ball into the paint.”

Maryland’s inspiring second-half comeback fell short in a 58-55 loss to No. 3 Purdue

I took a deep dive into Julian Reese’s strong performance, five missed opportunities down the stretch and how Mackey Arena hasn’t been too kind to the Terps.https://t.co/kd5R7UQByb

In October, Willard made his offensive game plan very clear: play fast and take a lot of 3-pointers. The Terps have done the first part fairly well, generating fast-break points off turnovers and missed shot attempts. In the win over Michigan last Thursday, the Terps totaled 14 fast-break points after being held scoreless in that category against Iowa.

The Terps’ outside shooting, however, has been problematic, ranking second-worst in the Big Ten and 322nd nationally. Maryland’s 30.1% success rate from deep is also the second-lowest by a Willard-led team since his first season at Seton Hall, when the Pirates shot 30.6% from the 3-point line.

The Terps have been known to shoot themselves out of games. In their first loss of the season against Wisconsin in December, they missed five straight 3-point attempts to start the first half while falling into an early 10-point deficit.

Those struggles continued in a loss to then-No. 7 Tennessee. The Terps took 46.1% of their shots from the 3-point line, where they went 2-for-24. Maryland missed six straight 3-pointers to start the game and was held scoreless for nearly 10 minutes before falling into a 21-point deficit with 1:49 to go before halftime.

Maryland’s eight-minute scoring drought in a loss to Rutgers on Jan. 5 featured six consecutive misses from the 3-point line.

“Sometimes I think we overthink the shots we were taking,” senior forward Donta Scott said. “[Willard] is a pretty good coach, like letting you play on the offensive. I think him telling us we want to [take] a lot of threes [made us] focus on that a little bit too much. We are trying to get back to [balancing our shot selection] a little bit more.”

Maryland’s emphasis on getting to the rim has played to the team’s strength. Graduate transfer guard Jahmir Young said he enjoys using his size and quick first step to get past defenders for a layup. That was the formula for his success against the Wolverines, as he scored 26 points while shooting 9-for-14 from inside the arc.

“It’s one of my strengths,” said Young, who has averaged 21.5 points over the past four games. “I’m trying to use that to my advantage and create for myself or my teammates.”

Earlier in the season, Willard noticed Young lacked aggression. He thought the Charlotte transfer struggled to adjust to bigger opponents and was settling for outside shots instead of finding ways to get to the rim. Against then-No. 3 Purdue on Sunday, Young was held scoreless in the first half, as he had trouble getting downhill. He turned it up a notch in the second, driving to the lane, getting his teammates involved and scoring in transition to finish with 10 points, seven rebounds and seven assists in a 58-55 loss.

“I think he’s progressed tremendously to where we all feel comfortable when he goes into the lane, and something good is going to happen,” Willard said. “It’s a better alternative than settling for jump shots early in the shot clock.”

If Maryland wants to continue to have success in the post, sophomore forward Julian Reese will be important. The former St. Frances standout has scored in double figures in three of the last four games, including a 19-point performance against Purdue and 7-foot-4 center Zach Edey.

“[Reese] is a big factor in what we do,” Scott said. “When he gets more touches, the team is better and more energized from a scoring [perspective].”

Willard will never tell his players to stop shooting. To better understand why he allows his players to shoot freely, Willard jokingly referred to a scene from the film “Along Came Polly.”

But if the Terps want to stay competitive in the league, they will have to continue doing what they do best and attack the rim.

“If we’re doing that type of stuff, we [will] most likely come out with a win,” Scott said.

Share
Facebook
Twitter
Pinterest
WhatsApp
Previous article
Why do coaches love Busquets but fans ‘not so much’? Ex-Barca assistant coach Juan Unzue answers
Next article
Tell Us About Your Best Day Ever (In Real Estate): Pulse