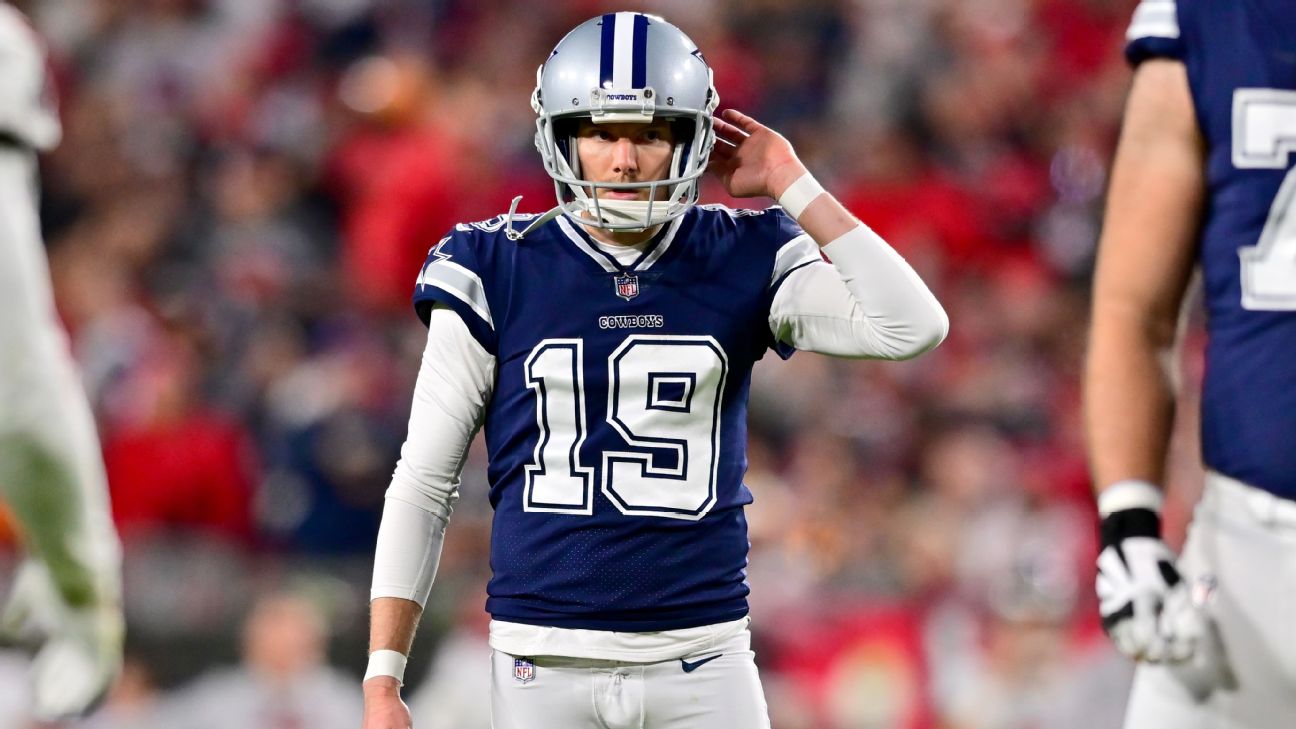 FRISCO, Texas — The Dallas Cowboys will go into the divisional round of the playoffs against the San Francisco 49ers with kicker Brett Maher battling the yips.

Maher became the first player in any NFL game since 1932 — a span of 16,207 regular-season and playoff contests — to miss four extra point attempts, according to the Elias Sports Bureau, in the Cowboys’ 31-14 wild-card win against the Tampa Bay Buccaneers on Monday.

“I believe in the hot hand, and I believe in the yips, absolutely,” special teams coordinator John Fassel said. “And you know, you wonder sometimes how you get into the yips, and you wonder sometimes how you get back into the hot hand. I think it’s keep stepping up to the line and shooting that thing. We missed a couple of free throws (Monday) … He had a hot hand. Let’s face it, he only missed (six) kicks all season. The yips happen, so I expect a hot hand coming up.”

The Cowboys plan to stick with Maher as their kicker.

Said head coach Mike McCarthy, “I think the biggest thing is just to make sure you got a good plan with Brett moving forward. Just make sure he’s ready.”

In the regular season, Maher made 29 of 32 field goal attempts, missing from 59 yards twice and 46 yards. He made 50-of-53 extra points but missed his final point-after attempt in the regular-season finale loss to the Washington Commanders then the four straight against the Buccaneers.

Maher visited with Fassel early Tuesday morning, and he described Maher as “distraught,” following the performance. Fassel said Maher will follow his normal weekly plan of kicking on Thursday and Friday.

“I think the biggest thing for us is not to pretend like it didn’t happen and kind of move on,” Fassel said. “We addressed it from kind of what happened mentally and physically.”

Fassel said he dealt with yips issues with Sebastian Janikowski and Greg Zuerlein in his career, but none came at such a pivotal moment of the season. While with the Green Bay Packers, McCarthy stuck with Mason Crosby through some struggles at different points of multiple seasons.

“At the end of the day we all have a job to do,” McCarthy said. “He knows he has to put the ball through the uprights. And he’s been super productive and consistent for us … I think so much in this business, especially this game, you learn from your experiences when it doesn’t go the way you like as opposed to the success of it. So just like our whole football team, we came out of Washington and got punched in the jaw and I think we clearly responded. I think he definitely has that in him.”

“I think this week will give him some confidence just getting back out there,” Fassel said. “He’s probably going to be mentally hurting pretty bad until he can kind of sweat and kick again. There’s no medicine like being back on the practice field. I know that. I am optimistic. And a good, professional man who really gives a damn, it leads me to be optimistic about a good rebound. We all want it.”

But Sunday’s game comes at a tricky venue.

“Levi’s Stadium, in my experience, is not an easy place to kick,” Fassel said. “There’s probably some conditions. There’s definitely a wind factor. So, let’s go. What else do we want?”