Future for Saturn 1B Rocket uncertain amid continuing deterioration 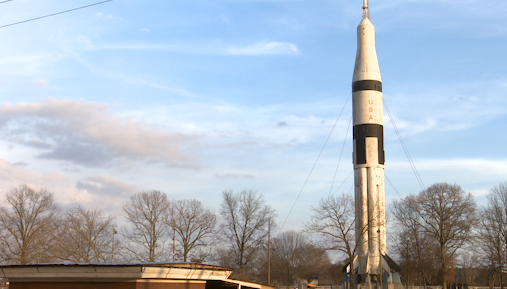 ELKMONT, Ala. (WHNT) — For those entering the state of Alabama from Tennessee on I-565, chances are you’ve probably seen the Saturn 1B rocket at the Ardmore Welcome Center — but officials say the rocket has an uncertain future amid continuing deterioration.

“Unless you’ve been up close to the rocket… you’re not aware that it is in not very good shape,” said Alabama Tourism Department Director Lee Sentell.

The Ardmore Welcome Center was established back in 1977. Two years later, the U.S. Space and Rocket Center donated the Saturn 1B rocket.

For four decades, it has served as a symbol for Huntsville’s role in the space program, but the 168 feet high, 22 feet in diameter rocket is decaying.

“There’s been an ongoing discussion within the space community in Huntsville as to what is going to happen or what should be done with the Saturn 1B about should it be taken down and restored or what should be put in its place,” Sentell said.

Saturn 1B was one of three Saturn rockets developed in Huntsville. It was designed for orbital training missions with both the Apollo spacecraft and the lunar model.

“I think we need something that’s more contemporary but would still make people want to stop and look at it,” Sentell continued. “It needs to be something just as exciting as what has been there for the last 40-something years.”

Right now, the welcome center is closed. It’s in the process of getting a facelift.

Sentell says the rocket was painted in 2006 and received additional maintenance in 2014, but it’s still deteriorating.

“Keep in mind: this rocket was never built to be intended to be outside for 40-50 years,” he added. “Rockets that were built were to be used one time.”

At the end of the day, Sentell says the future of Saturn 1B is in the hands of the Marshall Space Flight Center and the U.S. Space and Rocket Center.

“Anything that goes up in its place is something — it would take a big, cooperative outlay of money that would come from several different sources because whatever goes up next will be expensive,” Sentell concluded.

News 19 reached out to the Marshall Space Flight Center Tuesday afternoon. A spokesperson says they hope to provide us with more information regarding Saturn 1B on Wednesday.

‘I spoke to him like a father’: Brighton coach reveals conversation with Caicedo amid Arsenal interest