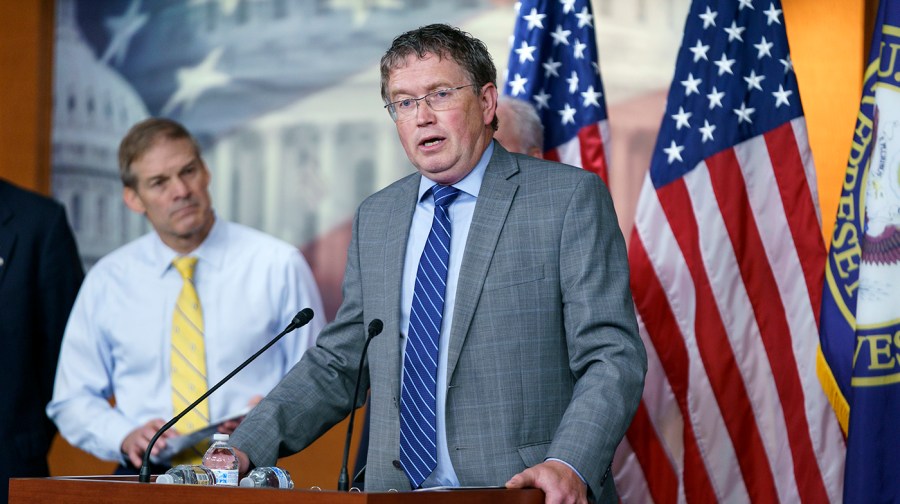 The House on Wednesday overwhelmingly adopted a resolution commending protesters in Iran, with just one lawmaker — Rep. Thomas Massie (R-Ky.) — voting “no.”

The concurrent resolution, which was approved 420-1, applauds the “bravery, courage, and resolve of the women and men of Iran demonstrating in more than 13 cities and risking their safety to speak out against the Iranian regime’s human rights abuses.”

The text of the measure points to the death of Mahsa Amini, the 22-year-old Iranian woman who died in police custody in September after the morality police arrested her on allegations that she violated Iran’s laws that require women to wear headscarves or hijabs.

She was detained for “inappropriate attire” on Sept. 13, then died on Sept. 16 after falling into a coma. A coroner’s report said she died from multiple organ failure, according to NBC News. Her family has said witnesses say she was beaten by officers.

Protests broke out in Iran following her death.

The resolution also lists instances of “persecution of women” by the Iranian regime “through misogynistic criminal statutes.”

It says Congress condemns “the brutal beating and death of Mahsa Amini” and “the violent suppression by the Iranian regime of women and men participating in the current demonstrations, including children, and calls for transparent accountability for all killings of protesters by Iranian security forces.”

The resolution also expresses support for those participating in protests and “risking their safety to speak out against the human rights abuses committed by the Iranian regime.”

Additionally, it “encourages continued efforts by the Biden Administration to respond to the protests,” including sanctions against the Iranian morality police.

The Hill reached out to Massie for comment on his vote. The Kentucky Republican has on a number of occasions broken from his party on foreign policy measures.

In 2018, he was one of two lawmakers to vote against a resolution supporting the rights of Iranians to freely express themselves, and condemning the regime for cracking down on legitimate protests.

House lawmakers on both sides of the aisle praised the resolution’s passage.

“Iran is the world’s leading state-sponsor of terror. We must stand with the brave people of Iran as they fight back against the oppressive Iranian regime and their human rights abuses,” Rep. Josh Gottheimer (D-N.J.), who co-led the resolution, wrote in a statement. “With this bipartisan resolution passing the House today, we’re making clear that we support those brave individuals committed to freedom and human rights, both in Iran and around the world.”

“I am proud that our bipartisan resolution has again overwhelmingly passed the House today. This resolution strongly reaffirms the American people’s support for the brave Iranian people speaking out against the Iranian regime’s human rights abuses,” he wrote in a statement.

“As the regime continues to escalate its violent crackdown, we must continue to do all we can to support the Iranian people’s right to self-determination and ensure the regime is held to account for its crimes. That means no sanctions relief for the regime, and fully enforcing all of our existing sanctions,” he added.