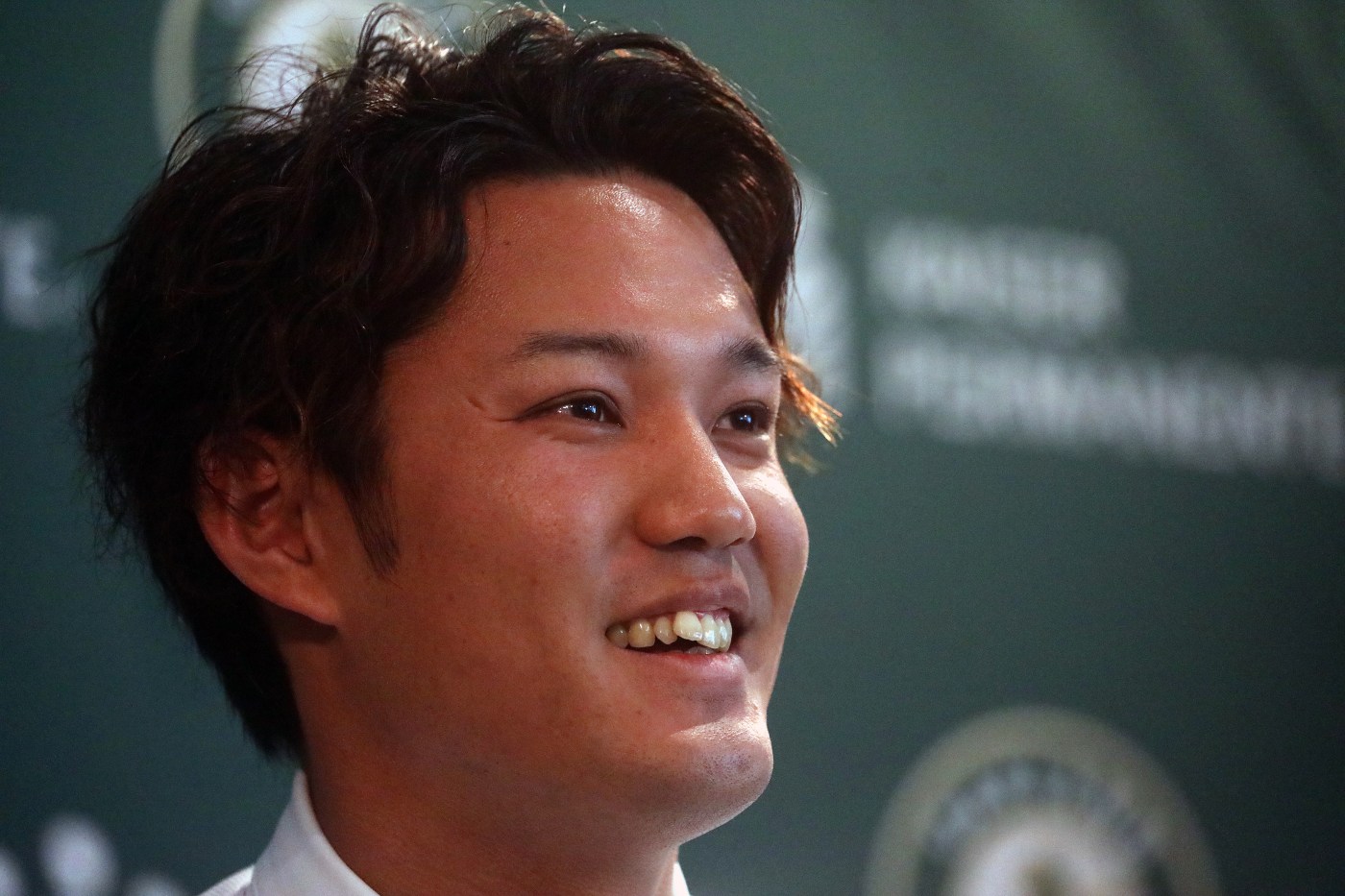 The makeshift podium room at the A’s Jack London Square offices was jam-packed with reporters, cameras and team executives — including former president of baseball operations Billy Beane standing in the back of the room.

“Wow,” general manager David Forst said as he looked around from the podium. “This is exciting, it’s not something we do every day. It’s been a while.”

The A’s aren’t big on the pricy free agency signings that might warrant a flashy press conference — a recent history of cost cutting and low budgets forces the front office to keep spending at a minimum. So it has been a while. Think Yoenis Cespedes’ intro in 2013, or Hideki Matsui in 2010.

Fujinami’s one-year, $3.5 million deal with the A’s wouldn’t normally warrant the big press conference, but the international draw was enough to get a large group of Japanese language media who will follow “Fuji” — his preferred American nicknamed — through his MLB journey.

Fujinami’s deal with Oakland poses a perfect opportunity for both sides. Fujinami was looking for a team that would let him start out of the rotation. And the A’s were in need of a starter.

“It was important to him to have a chance to be a starter, and that’s how we’ve seen him perform in Japan,” Forst said.

The opportunity to start alone could have been the ultimate draw to Oakland for hard-throwing Fujinami. The 28-year-old was drafted first overall into the NBP alongside superstar and high-school rival Shohei Ohtani in 2012 and made four straight NBP All-Star teams during his 10-years with the Hanshin Tigers as a hard-throwing starter who can hit triple-digits with a low 80’s mph slider and a splitter.

But Fujinami lost his command somewhere along the way. In 2017, at age 23, his walk rate jumped from 3.7 walks per nine innings to 5.7 in 26 games with the Tigers, including 11 starts. His struggles had him switching between starter and reliever toward the latter part of his Tigers career.

It was Fujinami’s track record as a starter that interested the A’s, who are in desperate need of some stability in their rotation with Daulton Jefferies out due to Tommy John surgery and James Kaprielian likely to miss time to start the season with an injury. Oakland brought back Paul Blackburn on a one-year deal and have Cole Irvin as their returning veterans with 2022 trade acquisitions Ken Waldichuk and JP Sears among the other rotation options.

A.J. Puk will still be stretched out as a starter, Forst said, with an opportunity to earn a starter role in spring training.  The A’s also signed Drew Rucinski to a one-year, $3 million deal. The 34-year-old spent the past four seasons in the Korea Baseball Organization League.

“I didn’t realize we brought Mt. Fuji to the Bay Area. We’re moving mountains, I guess,” Fujinami’s agent Scott Boras said. “Today marks a very special time for him, it really does.”

The deal also plants the seed for another American League West dynamic. Fujinami could wind up facing his old friend Ohtani when the A’s and Los Angeles Angels match up in at least one of the 13 times they play each other this season, including the opening week.

“No doubt about it. I’m very excited,” Fujinami said. “We’re the same age. Obviously, he’s one of the best players in the world. For the Japanese fans, it’ll be very exciting for us to play against each other. I’m very excited.”