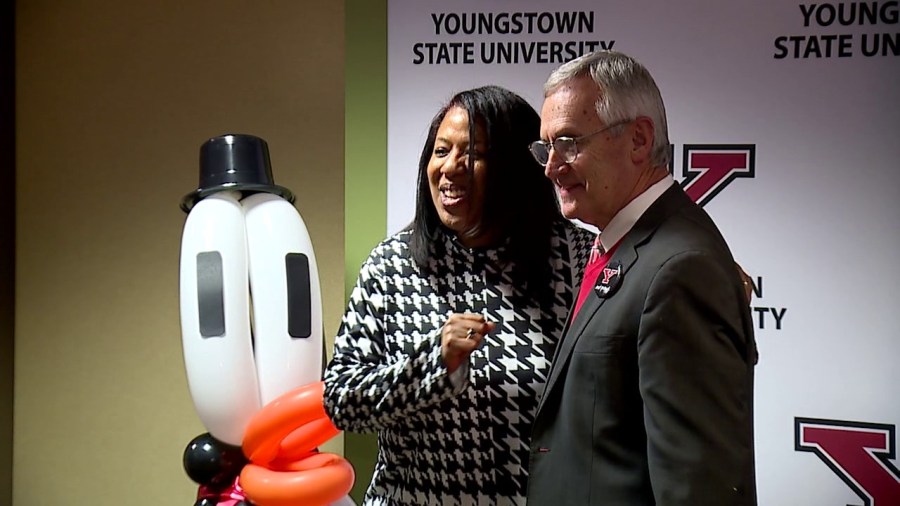 YOUNGSTOWN, Ohio (WKBN) — Youngstown State University freshman Logan Kaminski of Edinburg, Pennsylvania, was one of the few hundred people who took photos with President Jim Tressel during Wednesday afternoon’s farewell get-together on campus. It was a chance for the community to say goodbye and good luck.

Tressel stood outside of the Chestnut Room in YSU’s Kilcawley Center and greeted people wanting to bid him farewell. The line of which, at one point, was 200 people long.

Tressel: “You know, it’s just great to see happy people and I’m just so appreciative for the blessing we’ve had to be here.”
Reporter Stan Boney: “You humbled a little bit?”
Tressel: “Oh, I’ve been humbled since the day I got here in 1986.”

“I think he’ll be remembered for a long time,” said Dave Janofa, who works for the university.

“So I saw him come in at the time, I think he was 33. Now I’m working at Youngstown State and I’m with him on his last day out. So it’s kind of come full circle,” Janofa said.

“It’s a bittersweet day for us. We’re happy for him but sad to see him leave,” said Associate Vice President Elaine Ruse.

Ruse and Associate Vice President Jeanne Herman have both worked directly with Tressel.

“He just made a difference, whether it was building apartments for our students or just simply talking to the students in the cafeteria,” Herman said.

Also in attendance was Dr. Helen Lafferty, who will take over for Tressel as interim president.

“I want to enrich the lives of our students, of our faculty, of our staff and I just want to keep it as good as he’s leaving it,” Dr. Lafferty said.

“I adore President Tressel to bits. I think he’s a fantastic man. Everything he’s done for this school itself, he’s such a community-driven person,” said student Logan Kaminski.

Students like Kaminski and Catrina Wright showed up to shake his hand, and for another reason.

“I never got to take a picture with him and that’s why I’m here because he’s my favorite,” Wright said.

Wright received her wish, a photo op with Tressel.

Tressel’s last day is Saturday. He and his wife moved out of their on-campus house before Christmas and are living in Medina in a house they bought when he was at Akron.