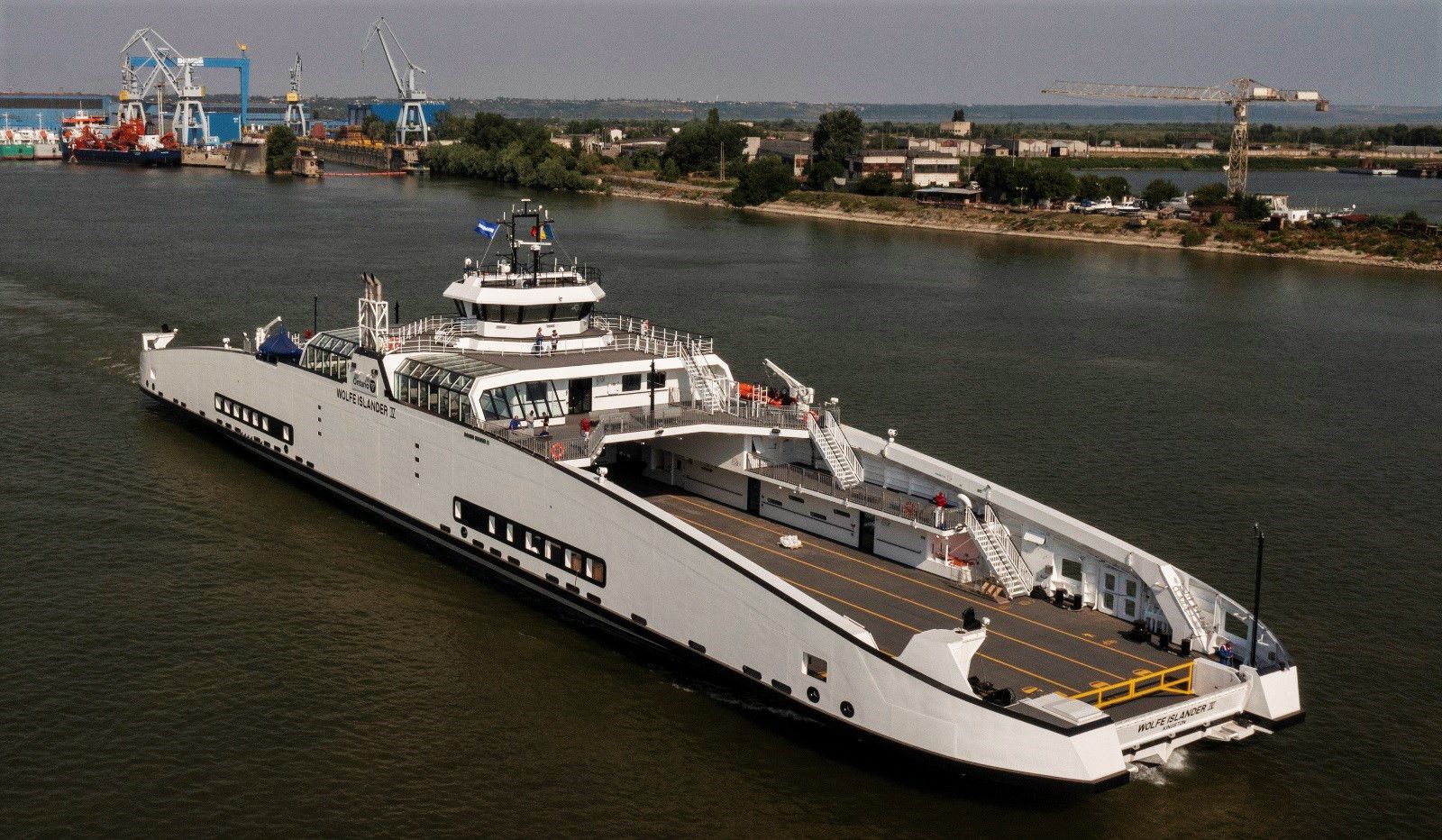 Sometime in 2025, an Australian boat builder plans to float a 426-foot, all-electric ferry that can carry up to 2,100 passengers and 226 vehicles. The company, Incat, says the ferry will be the largest of its kind, with a power range of 100 nautical miles. A South American ferry operator, Buquebus, will use it to carry passengers between Argentina and Uruguay.

The original design called for the ferry to be powered by liquefied natural gas, but, with advances in battery technology, both Incat and Buquebus decided to go electric. That is the case in many other ports of the world, where ferries are either being constructed or retrofitted with electric engines for service in waterfront communities.

Why not in the Chesapeake Bay?

Candela, a Swedish company, has developed high-speed, hydrofoil commuter boats and smaller water taxis for the European market; they are all battery powered. Scandinavian countries have been moving to electric ferries for several years; Norway, to cite one example, plans to convert most of its ferry fleet to battery power.

In the U.S., the state of Washington is in the midst of converting its ferries to electric hybrid systems. The goal, of course, is to reduce the use of diesel fuel and the amount of greenhouse gasses emitted by the nation’s largest ferry system.

Why not in the Chesapeake Bay?

I first wrote columns about the electrification of ferries in Europe and their possible use across the Chesapeake in 2019. A ferry service — not one ferry, but several, originating at multiple points along the bay — just might negate the need for a third span of the Bay Bridge at an estimated cost of $10 billion.

Since then, a state-sponsored study dismissed car-carrying ferries as an alternative to a third bridge, calling the idea too expensive and logistically problematic and blah blah blah. (Larry Hogan was governor and he proposed the third bridge to relieve traffic congestion between Maryland’s two shores. So the official pooh-pooh of electric ferries “as a stand-alone option” was predictable.)

I bring up the subject again because, despite all the naysaying about reintroducing ferries to the Chesapeake, a good number of people in Maryland apparently want to see them again. I’ve heard from a lot of Sun readers who think the idea is both practical and cool. Now, a consortium of five Maryland counties is seeking bids for a feasibility study on a “sustainable ferry service” to connect passengers to destinations along the bay.

The consortium is made up of representatives from Calvert County, Somerset County, St. Mary’s County and Queen Anne’s, with the Annapolis and Anne Arundel County Conference and Visitors Bureau leading the group. (Baltimore City and Baltimore and Harford counties should get in on this, too.)

Last fall, the consortium received a $125,000 grant from the U.S. Department of Commerce, a sum matched by the five counties and the Maryland Economic Development Corporation.

The emphasis is tourism — the ferry as a way of giving more people access to the water and to more stops along the bay, the small towns and ports, the national and state parks. “Travel by passenger ferry, in contrast to travel by vehicle, impacts how we see the Bay, its industries, its cultural and recreational connections,” says the consortium. “This initiative is not envisioned as a replacement for vehicular travel, rather a compliment or an alternative way of travel.”

It’s a good idea: Visitors could avoid the Bay Bridge altogether and take an electric-powered ferry from Annapolis for a day trip to Crisfield, or perhaps from Edgewater to Romancoke, or from Chesapeake Beach to Tilghman Island, or maybe Havre de Grace to Betterton. Imagine leaving your car at Tradepoint Atlantic or at Port Covington and taking an electric ferry to Rock Hall for the day.

A friend in Chestertown has spent the last 30 years getting to know the Eastern Shore. He doesn’t understand why so many people are in a rush to get to Ocean City when there’s so much to see on the way. A system of ferries would not only drain some traffic away from the Bay Bridge, it would put more of Maryland right in front of us; we’d see people and places missed in the fast drive to the ocean.

While the consortium’s idea is a good one, I don’t believe it’s practical to expect everyone to leave their cars behind. It seems to me that a network of medium-size electric ferries, each with enough space for maybe 50 cars, would serve two purposes: It would bring more tourists to places otherwise overlooked and give those who want to drive to the ocean an alternative route across the bay.

As for ferries eliminating the need for a third Bay Bridge — I concede that’s a lot to ask from boats. But ferries should not be discounted as a way to relieve pressure on the existing bridges.

Supporters of a third span seem stuck in the 20th Century; they assume a new bridge is necessary because traffic across the two existing bridges will continue to grow and get worse. But, with more people working from home since the pandemic, there should be fewer daily commuters. With electronic tolls, there should be fewer traffic backups at the bridges.

Add a few battery-powered ferries to take people from four or five points on the western shore to destinations on the Eastern Shore and we might get somewhere.