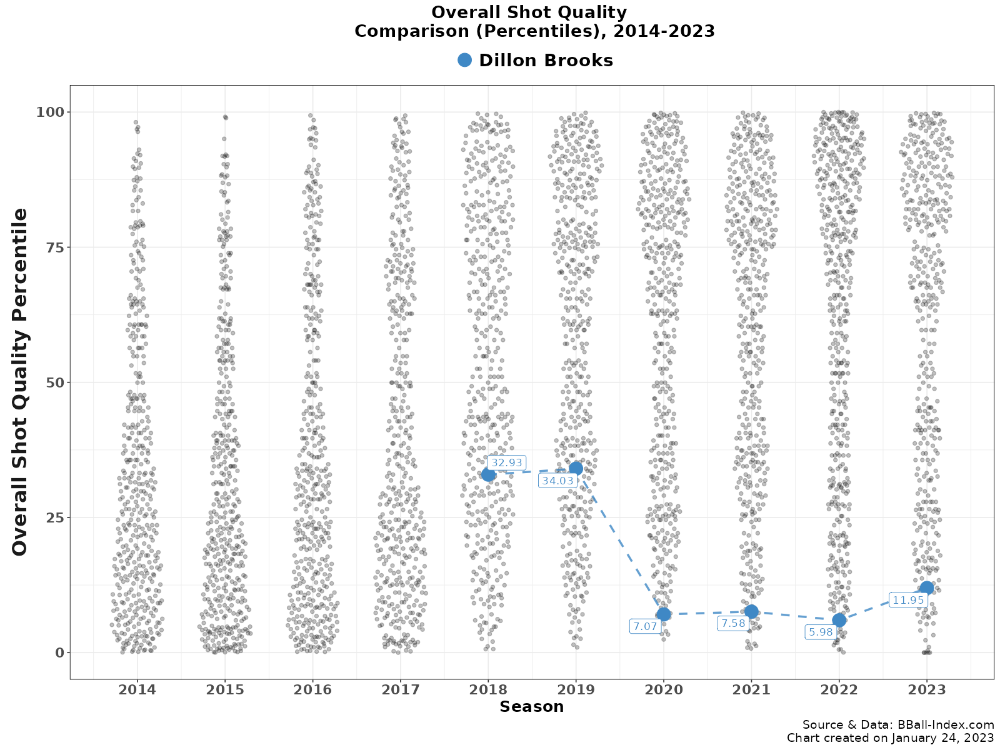 You can ask anyone around the team and they’ll say Dillon Brooks is the heart and soul of the Memphis Grizzlies, who are one of the best teams in the league.

Brooks tends to find himself involved with drama, whether it’s trash-talking other teams and T.V. personalities or disrespectfully doing the gritty on the logo of the opposing team. So long as he does not get suspended for cheap shots against the other team, Brooks is integral to success in Memphis.

Memphis has outscored opponents by 220 points during minutes when Brooks has played, which ranks sixth-best among all players in the Western Conference. Whatever he is doing, it is contributing to winning.

For the second season in a row, per Dunksandthrees.com, his Defensive Estimated Plus-Minus ranks in the 95th percentile or better. There is a reason why NBA.com believes that Brooks is a potential candidate to win Defensive Player of the Year.

His defensive impact is more than just casually good. His matchup difficulty and positional versatility both rank near the top of the league so far this season, and he is constantly guarding the best player on the opposing team.

He also took 1 through 5. But this was pretty bad too.

It is on the offensive end of the floor, however, where Brooks has a serious problem. He may be averaging 15.9 points per game, but there are concerns.

The former Oregon wing was never known for his efficiency, although this has been the least efficient offensive season of his professional career.

Alongside the likes of Russell Westbrook and Marcus Smart, as well as young guards like Jaden Ivey and Josh Giddey, he is one of the least efficient high-usage players in the NBA.

His shot selection plays a significant role in these blatant inefficiencies, but he does not believe that it is a problem (via Drew Hill):

“I guard my [expletive] off every single night. I give my heart every single night. My guys can live with some of the shots I take. I’m learning and growing in that. My coaches be on me about being more of a playmaker. Six assists tonight. Kudos to me.”

Memphis star guard Ja Morant confirmed that the Grizzlies “don’t care” about Brooks’ shot selection. Grizzlies coach Taylor Jenkins, meanwhile, explained that Brooks “might force one or two or something” just to get himself going.

Might this become a problem for the offense during the postseason?

Brooks has always taken challenging shots, especially when in transition, according to BBall-Index. He tends to finish as one of the players who have the lowest-quality shots in the league.

Another useful stat that could potentially help illustrate this point is Simon Gerszberg’s version of Shot Quality, which uses over 90 variable inputs to determine an individual player’s shot-making ability:

“Each shot is graded on a 0-100 percent scale, which represents the likelihood the shot results in a made basket, and then is multiplied by the amount of points attempted to get the ShotQuality value … If a player has [a] possession that is below the 33rd percentile then they’re credited with a bad possession.”

(Skip ahead to see the results; keep reading to learn the process.)

So to give an example, let’s say Brooks took a difficult 2-pointer (2) only considered 30 percent (0.30) likely to go in based on his previous looks. That attempt would get a shot quality score of 0.60 because that is the result of 3 multiplied by 0.25.

This, as you could imagine, would be graded as a bad possession:

Even if you don’t understand the math, the results are noteworthy.

According to the database, 73.6 percent of Brooks’ shots are considered bad possessions so far this season while only 16.2 percent are graded out as good possessions.

To put that in perspective: Among the 219 players who have finished at least 250 offensive possessions, only two (Detroit’s Killian Hayes and Oklahoma City’s Tre Mann) currently have a higher frequency of finishes defined as bad possessions.

For comparison, last season, there were 409 players that finished at least 150 offensive possessions. But no one in the NBA had a higher frequency of bad possessions than Brooks did (77.1 percent) in 2021-22.

The season prior, with the same qualifications, Brooks finished with the ninth-worst bad possession frequency rate (66.6 percent) and the highest among those with at least 800 finishes.

Curiously, however, he was nowhere near as bad (52.1 percent) during his 2019-20 campaign. That means that over the course of the past few seasons, Brooks has become more and more emboldened to take potentially reckless shots.

Using a different methodology that you can learn about here, Synergy has its own version of this metric: Synergy Shot Quality (SSQ). Once again, skip to the charts if you don’t care about the equation and just want to see results. 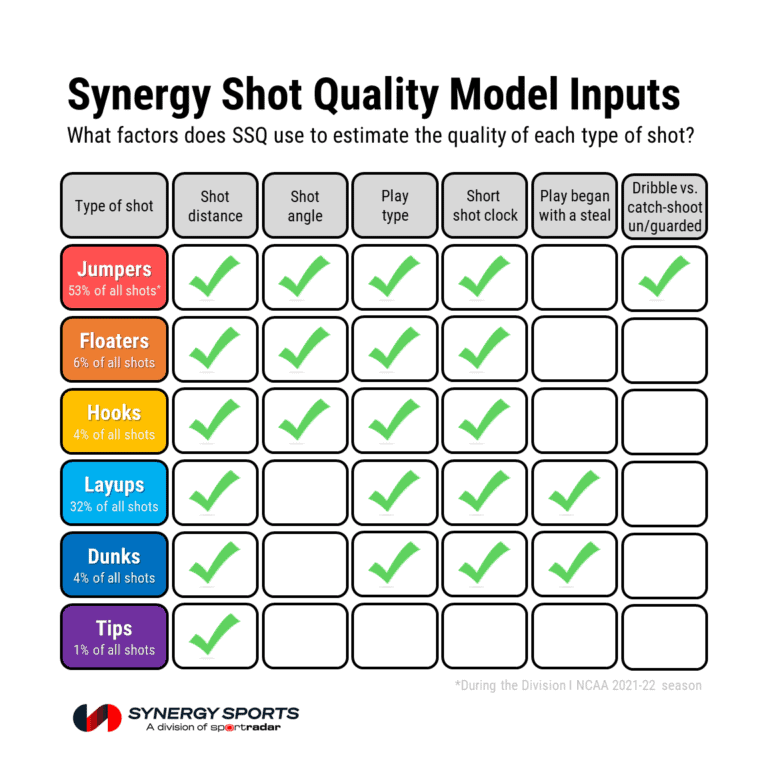 SSQ is their version of shot quality — or expected points per shot based on the variables listed above. Points Per Shot (PPS) is exactly what it sounds like: How many points per shot was the player able to score?

Synergy Shot Making (SSM) is PPS subtracted by SSQ. Those who make more shots than expected based on the difficulty of their attempts will have high SSM scores

Here are the results of Brooks’ shots considered to have low SSQ:

So far this season, Brooks’ frequency of attempting shots defined as low by SSQ is at a career-high 29.6 percent.

During each of the previous two seasons, Brooks’ Points Per Shot (PPS) on low SSQ attempts was nearly identical to the expected SSQ of each attempt. That put him at least relatively on par with league expectations.

This season, however, his SSM (-0.09) has fallen far below expectations.

For The Win spoke to Synergy’s Todd Whitehead, who provided us with this interesting data about low SSQ shots during the 2022-23 campaign. Among the 79 players who have at least a total of 500 FGA so far this season, only six have a lower overall SSM so far than Brooks.

It is not the end of the world if you take tough shots — Durant and Curry have among the most challenging shot diets in league history. 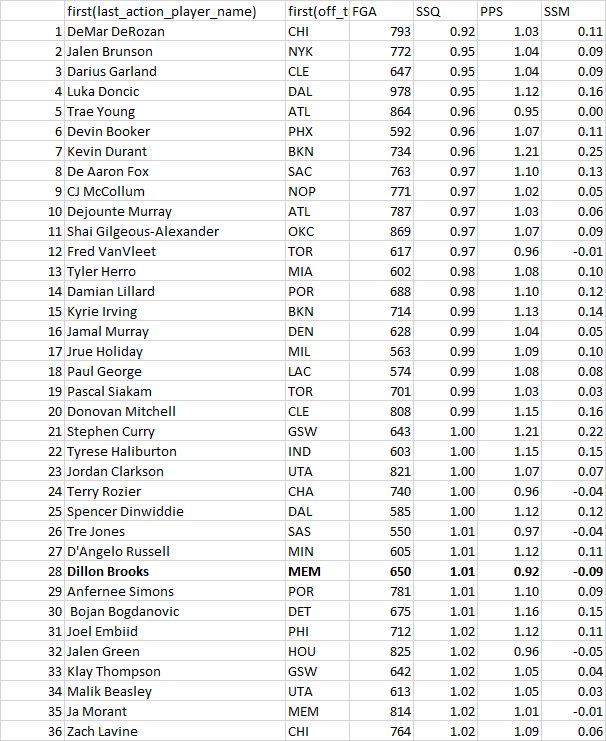 DeMar DeRozan can (and should) continue to shoot confidently like Kobe Bryant and take shots that are considered low quality (0.92) because his points per shot (1.03) exceed expectations.

Overall, Brooks’ Offensive Box Plus-Minus (oBPM) currently ranks third-worst in the NBA among all qualified candidates. He is simply not a good enough scorer to get away with these ambitious attempts.

Brooks may not have the worst shot selection of anyone in the NBA, but he absolutely is in the conversation. If the Grizzlies are going to make a serious run this postseason, this needs to be addressed sooner rather than later.

Re-ranking the 23 best NBA players under 23 years old, with a new star emerging at No. 1 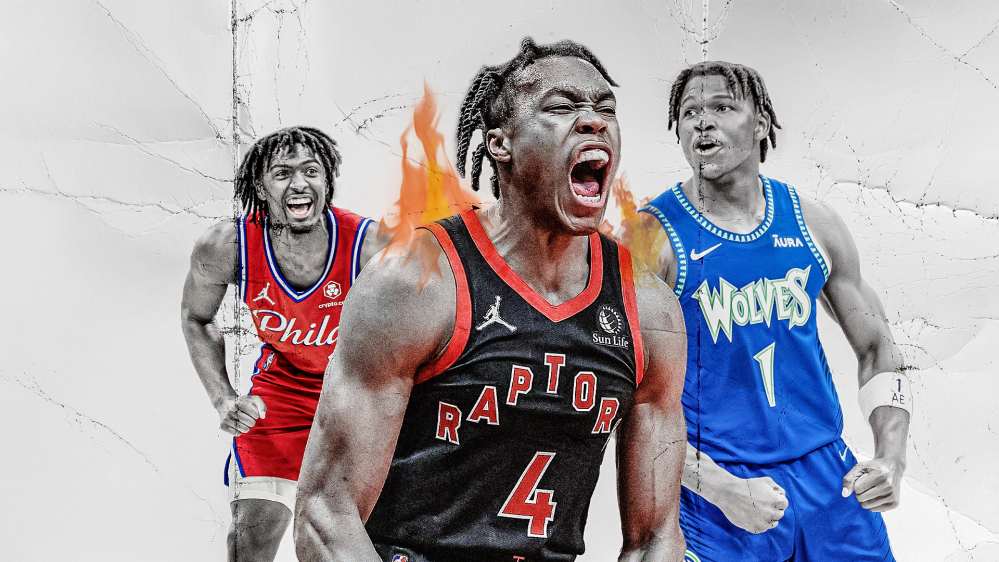