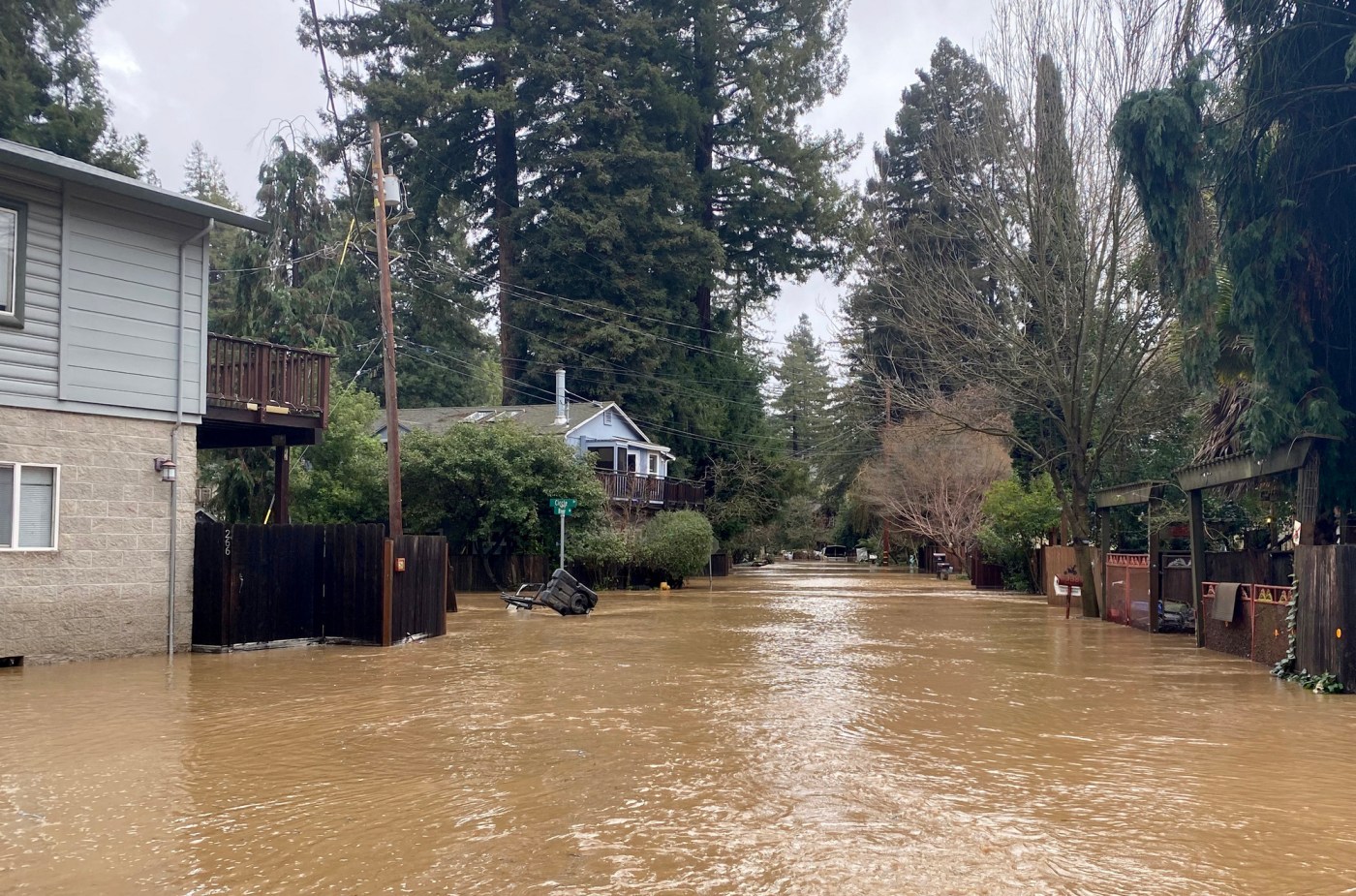 Amid dramatic ocean swells and drenching atmospheric rivers, a new report lays bare a hidden aspect of sea level rise that has been exacerbating flooding in the Bay Area.

The report, which was released Tuesday, maps areas that could flood from groundwater hovering just a few feet, or even inches below ground. This layer of water gets pushed upward as denser water from the ocean moves inland from rising tides. On its way up, even before the water breaks the surface, it can seep into the cracks of basements, infiltrate plumbing, or, even more insidiously, re-mobilize toxic chemicals buried underground.

Communities that consider themselves “safe” from sea level rise might need to think otherwise, said Kris May, a lead author of the report and founder of Pathways Climate Institute, a research-based consulting firm in San Francisco that helps cities adapt to climate change.

“I started working on sea level rise, then I went into extreme precipitation, and then groundwater … but it’s all connected,” May said. She noted that hot spots where the soil is already saturated with rising groundwater were some of the first to flood when a recent series of atmospheric rivers dumped record rainfall onto California: “These huge storms really highlight the magnitude of the risk.”

The report unfortunately does not include all Bay Area counties. May said they expect to publish updated groundwater level data for Santa Clara and Contra Costa counties in about a year.

The new findings are the result of an unprecedented joint effort by May, the San Francisco Estuary Institute (SFEI), UC Berkeley and a wide-ranging team of regulators, building officials, and flood-control agencies to identify where the groundwater along the bay shoreline is close to, or already breaking, the surface. A set of searchable maps, available online to the public, zooms in on Alameda, Marin, San Francisco and San Mateo counties — the first of many jurisdictions that researchers hope will undergo this intensive data-refining process.

The maps build on a new but growing body of research. In 2020, another study led by the U.S. Geological Survey laid the groundwork for this issue along California’s 1,200-mile coast, and state toxic substances control officials have since started their own mapping efforts to better understand how rising groundwater might affect contaminated land.

Similar research into vulnerable communities in Southern California is now also being conducted by a team led by Cal State Long Beach and Cal State Northridge.

This emerging flood risk raises many tough questions, but the data so far make clear the need for urgent action.

“We really need to focus on where contaminants may be mobilized by rising groundwater, because that could have an immediate impact on a 6-year-old, or a pregnant woman, or someone who has extra vulnerability in their immune system,” said Kristina Hill, a UC Berkeley researcher who has been particularly concerned about underserved communities like Marin City and historically industrial areas like East Oakland, where much of the soil is contaminated. “This [remobilization] could be happening now while it’s wet outside.”

When talking about groundwater, there are two types to keep in mind: One, the kind researchers are now worried about, is the unconfined water that gathers in the pore spaces of soil very close to the surface. This is the water that runs off streets and soaks into the ground. The other type, confined in aquifers many hundreds of feet deep, is the water that we tap for drinking.

When the tide moves inland, the shallow freshwater tends to float on top of the denser saltwater — and gets pushed upward toward the surface as sea levels rise. Because the shallow groundwater is not consumed, few people have studied this layer of water in California.

Hill, who directs the Institute of Urban and Regional Development at UC Berkeley, first realized almost a decade ago that this shallow groundwater layer had been overlooked in sea level rise conversations. Together with May and Ellen Plane, who is now an environmental scientist at SFEI, she analyzed data from 10,000 wells across the Bay Area and concluded more than twice as much land could flood from groundwater as the ocean continued to rise.

Then, in a remarkable move to turn these first approximation studies into data that government agencies would actually use, the researchers called on the officials themselves to help fill in the data gaps. City and county staff tracked down geotechnical reports and other possibly useful records that had been archived in various (and often siloed) departments. They sifted through hundreds of PDFs and spreadsheets to compile all the underground data that had been gathered for construction permits and projects.

Public works staff then vetted the updated maps with their own observations — such as storm drains that back up during high tide and roads that tend to flood even when it’s not pouring.

Patterns emerged. Many of the communities most exposed to flooding were built along historical creeks or on top of filled-in wetlands. When you overlay 5.5 feet of sea level rise on the map, the water is projected to move back in to essentially every wetland area that has been filled.

Officials in San Francisco are already taking this data into account as they consider new building projects. Other cities and counties are starting to rethink their flood-protection options — a traditional levee or seawall, after all, would do nothing to stop the groundwater as it moves with the rising sea.

Ultimately, officials need to figure out what to do with all the contaminated sites along the bay that are still awaiting cleanup — or those that need to be further remediated, said Hill, who has been finalizing another set of maps that will show where, and in which direction, rising groundwater might remobilize harmful chemicals underground. The oft-used approach of “capping” a toxic waste site rather than actually removing the contamination from the soil, for example, may no longer be sufficient

Regulators at the San Francisco Bay Regional Water Quality Control Board have been following all this research with great interest and are already diving into the updated maps, said Assistant Executive Officer Lisa Horowitz McCann. The board recently ordered 16 bayfront landfills to account for groundwater rise in their long-term flood protection plans, and caseworkers are now going through hundreds of cases to figure out which sites need further action.

“This data further empowers — and actually legally supports — stronger actions that we can take,” Horowitz McCann said. “We’re looking at a bigger universe of cases now.”

Researchers hope to continue this mapping work for the rest of the Bay Area. Next up is Contra Costa County in the East Bay, where a number of historically contaminated sites are being considered for redevelopment along the industrialized shoreline of Richmond.

A lot more work also needs to be done to understand what the actual damage will look like for gas lines, septic systems, foundations and other buried infrastructure, said Patrick Barnard, whose research team at the U.S. Geological Survey has done extensive flood modeling that is used by officials across the state.

“We need to start merging this information with the engineering world,” he said.

“We built everything assuming the soil is dry… what does it mean to have it now be saturated all the time?”Barnard has also been studying what scientists are starting to call “compound extremes.”

What do we do when seawater is trying to push in during a high tide, at the same time our rivers and storm drains are trying to flush excess rainwater into the ocean, and the ground can’t absorb anything because the groundwater is also flooding?

“We looked at this in one case for the Napa River, and basically, your average annual winter storm could turn into the 100-year flood event if the ground is already saturated,” he said. “Add any amount of rain on top of it, even amounts that are not usually catastrophic … and they turn into catastrophic impacts.

”For Chris Choo, the planning manager for Marin County, helping the latest mapping effort has been eye-opening in more ways than one. She has spent years helping communities plan for climate change, and the challenges have only gotten more complicated the more each disaster seems to overwhelm the next.

“We went from drought, drought, drought and being really worried that we don’t have enough water, to suddenly, within two weeks, seeing the impacts of having way too much of it,” she said, noting not just the flooded roads that have kept her colleagues working around the clock, but also the powerful surf that ripped through much of California earlier this month and even split a pier in two.

“People still tend to think of these things as isolated terrible things, rather than as part of a collective shift … in what the future might hold,” she said. “We live in nature and too often think of ourselves as separate from it … but nature is still very much in charge.”