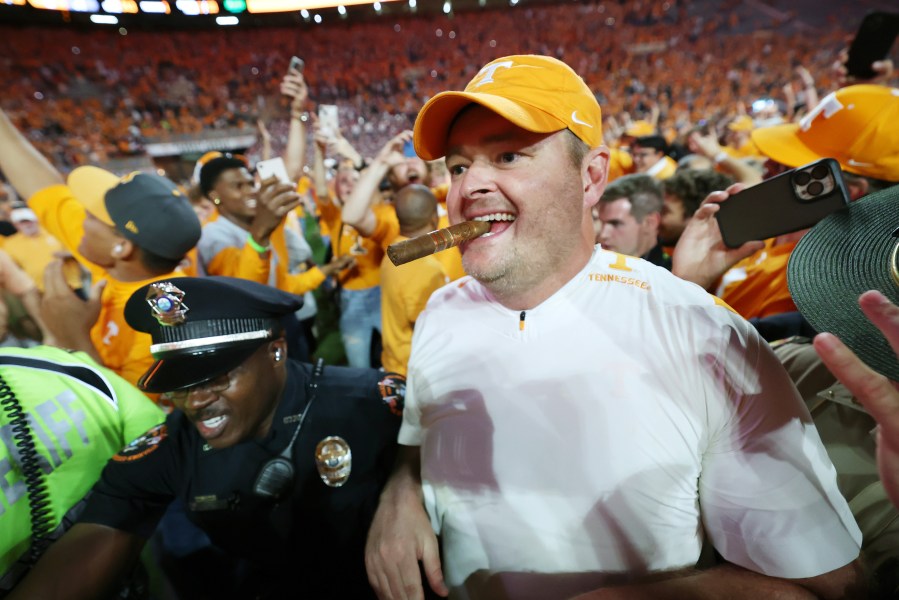 KNOXVILLE, Tenn. (WATE) — After giving Tennessee his all for the past two seasons, Coach Josh Heupel is getting a contract extension worth millions.

Heupel’s extension terms include annual compensation of $8,725,000 million, plus incentives, keeping him in Big Orange through January 2029. The payrate roughly translates into a $727,000 paycheck each month, excluding taxes and such things. The extension also adds a year onto the previous extension that was signed last year.

The new contract extension also deletes a line in a previous contract that limited the amount of annual compensation at $1.2 million. The contract extension increases the number of round-trip flights that Heupel is entitled to five, with an additional 10 “occupied legs.”

Under Heupel’s leadership, Tennessee experienced it’s first 11-win season in more than two decades. He has produced an 18-8 overall record, seven victories over Top 25 teams at the time of meeting, the program’s first New Year’s Six berth in the College Football Playoff era and a No. 6 final ranking. The seven ranked wins are third nationally among FBS head coaches during that span. UT was 3-7 a season prior to Heupel’s arrival.

“I am grateful to President Boyd, Chancellor Plowman, Danny White and of Vol Nation for their tremendous support,” Heupel said. “Our staff takes great pride in representing the Power T, and it’s something we never take for granted. We will continue to work tirelessly to build a championship program that all of Vol Nation and all VFLs can be proud of,” Heupel said.

“Most importantly, our players are the people who deserve all of the credit for our resurgence on Rocky Top. Over the last two years, they believed in us and poured their energy into every single day with hard work, leadership, cohesiveness and consistent habits. I am proud to be their coach,” Heupel said.

In both seasons under Heupel, Tennessee has surpassed its SEC preseason projected order of finish. Heupel’s Vols entered the 2022 campaign unranked but ascended to No. 1 in the initial College Football Playoff rankings after a rapid 8-0 start, giving UT its first top poll position since the 1998 national championship season. Heupel joined College Football Hall of Famers Phillip Fulmer (1998), General Robert Neyland (1939, ’51) and Bowden Wyatt (1956) to lead a Tennessee team to a No. 1 ranking.

The Vols concluded the year No. 6 in both the Associated Press and USA Today AFCA Coaches polls, representing their highest finish since 2001. Tennessee defeated four foes in the final AP Top 25, which was the second-highest total among teams in the final poll. The team finished with six wins over ranked teams, tying the 1998 squad for the most in program history.

Heupel’s teams have established a clear identity as the nation’s No. 1 offense with an attacking defense. In 2022, the Vols led the nation in scoring offense (46.1), total offense (525.5), passing efficiency (181.4) and total touchdowns (79) for the first time in school history. That occurred after UT was the nation’s most improved offense when it finished top 10 in all four of those categories in Heupel’s first year.


Should marijuana be legalized in Tennessee? Lawmaker files bill to add cannabis-related questions to 2024 ballot

The Vols’ rise to national prominence under Heupel’s leadership has enabled UT to sign back-to-back elite recruiting classes. His top-10 Class of 2023 features three of the top 50 signees in the country according to On3.com, including the nation’s No. 1 player in quarterback Nico Iamaleava of Long Beach, California.

Player development has been evident as well in the Heupel era. Five Vols were selected in the 2022 NFL Draft, representing the program’s most since 2017 and more than UT produced the previous three drafts combined. The Vols are poised to add to that number this spring.

Four Tennessee players earned first-team All-SEC recognition from the league’s coaches in the fall of 2022—wide receiver Jalin Hyatt, quarterback Hendon Hooker, offensive tackle Darnell Wright and defensive end Byron Young. The four selections were the most for the program since 2006.

Heupel mentored Hooker, who swept the SEC Offensive Player of the Year awards as selected by the coaches and Associated Press, after an indelible season. Hooker secured the highest Heisman Trophy finish by a Vol in 25 years with fifth place. Meanwhile, Hyatt became the first player in school history to claim the Biletnikoff Award as the nation’s top receiver. He earned the prestigious honor of becoming the 13th unanimous first-team All-American in UT history and the first since College Football Hall of Famer Eric Berry in 2009.

Off the field, the Vols have flourished under Heupel with 34 SEC Academic Honor Roll selections in the fall of 2021 and three Academic All-America accolades in the last two seasons combined. In 2021, Tennessee produced multiple College Sports Communicators (CSC) Academic All-Americans in the same season for the first time as Paxton Brooks and Matthew Butler received first- and second-team distinctions, respectively. Brooks repeated the honor in 2022.

The Vols’ on-field success also correlated in the classroom, as the football program’s 2022 fall semester GPA was its highest on record, with 13 Dean’s List student-athletes leading the way.

Heupel emphasized the holistic development of the student-athlete and enhanced the team’s player development staff. The group focuses on year-round programming geared toward preparing the Vols for personal, academic and leadership success, as well as community engagement efforts.

As an Aberdeen, South Dakota native, Heupel owns a stellar 46-16 overall record (.742) and a 30-11 (.732) conference mark in five seasons as a head coach. His 46 victories since 2018 are top eight nationally, and he is one of only four active FBS head coaches to lead multiple programs to New Year’s Six Bowl appearances in the CFP era. His teams have earned bowl berths and finished in the top 10 nationally in scoring and total offense in all five seasons.