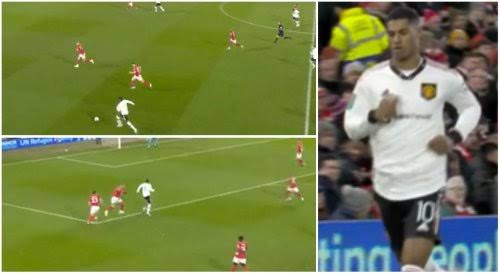 After the toughest season of his Manchester United career, the English forward has bounced back in style under Erik ten Hag and it pretty much feels as though he scores every time he takes to the field.

In fact, since the 25-year-old returned from the World Cup, the 1-1 draw at Crystal Palace is quite literally the only time that he hasn’t scored in a game for the Red Devils.

Rashford boasts 10 goals and two assists from 10 matches since flying back from Qatar, which is remarkable when you think that it was touch and go whether Gareth Southgate would call him up or not.

Did Rashford score in Forest vs Man Utd?

And all it took was six minutes of the first leg of United’s Carabao Cup semi-final against Nottingham Forest for his astonishing purple patch to stretch even further.

Just a matter of days after he scored a fine solo goal in the 3-2 defeat to Arsenal, Rashford once again got on his bike to dribble with the ball from his own half at the City Ground.

And instead of playing a pass to one of his teammates, the United star’s confidence was so high that he just went straight for the jugular and tore his way through Forest’s back-line.

By the time he’d burst his way into the penalty area, you just knew that there could only be one result with Rashford duly sweeping home a clinical finish at the near post – check it out:

Rashford what a goal !!!! pic.twitter.com/wniJQhKI4o

1 of 3 children killed in Greensboro fire had cocaine in his system, autopsy reveals