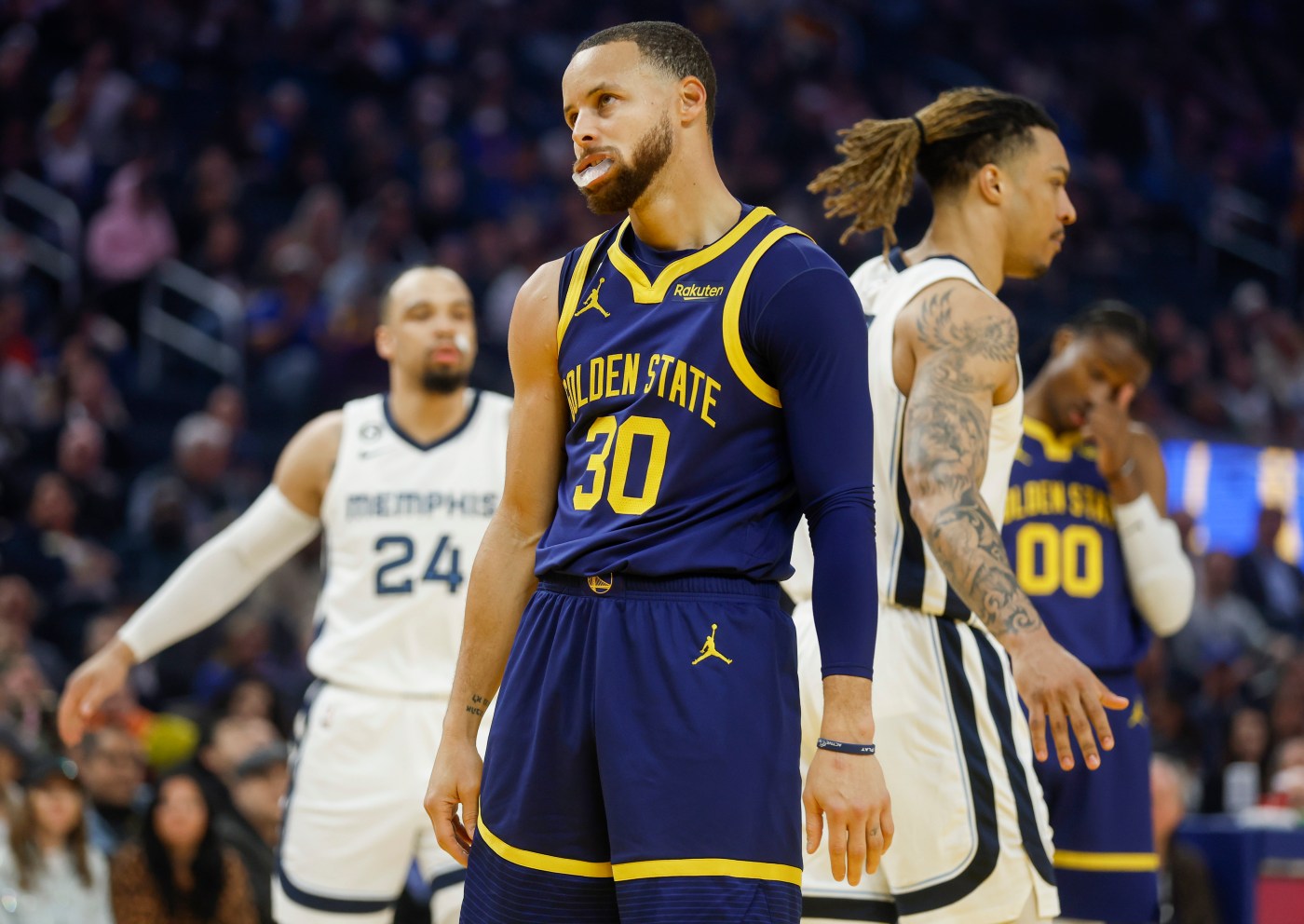 But even without their star player, the Warriors managed to get the job done. Jordan Poole played the hero, making a game-winning layup with about a second left to lift the Warriors past the Memphis Grizzlies 122-120.

Curry appeared to throw his mouthpiece in frustration and was assessed a technical foul and ejected from the game with 1:14 left in the game.

“Ref, you suck” chants echoed through Chase Center as Curry made his way to the tunnel and headed back to the locker room.

Curry, who’s been ejected only three times in his career, finished the night with 24 points on 10-of-19 shooting, including four 3s. He also had six assists and five rebounds.

With the Warriors down one, Klay Thompson knocked down a 3 to give Golden State a 120-118 edge with 14 seconds to go. He celebrated by running to the other end of the court and flexing while the Grizzlies called a timeout.

Brandon Clarke hit a layup to tie the game. But after the Grizzlies fumbled a rebound off a Klay Thompson miss, Poole made the go-ahead basket leaving little time for Memphis to counter.

Desmond Bane threw the ball across the court into the stands.

This one was over. Gold-and-blue confetti rained from the ceiling.

It was just the kind of exciting ending that TV partners would hope for when they decided to make Rivalry Week a thing this season for the first time.

The history between these two franchises is rather brief but it’s growing with every meeting. Memphis, a young, flashy group eager to dethrone the Warriors, sent Golden State packing in the play-in tournament two years ago. Then, the Warriors got their revenge in a fiery Western Conference semifinals that featured ample drama — from hard fouls and a broken elbow to plenty of trash talk and intense competition.

Wednesday was another chapter in this budding rivalry.

There were intense moments. Jonathan Kuminga drilled a corner 3 in the second quarter and turned to stare down the Memphis bench. In the third, Draymond Green and Brandon Clarke were slapped with technical fouls after Green lightly pushed Clarke away after the Grizzlies big man stared the Warriors star down following a dunk. The tech was Green’s 14 of the season, putting him two away from a one-game suspension.

The fans also got into it. They showered Curry with “M-V-P” chants when he stepped up the free throw line and booed the Grizzlies when they stepped up to the charity stripe. A chorus of cheers rang out when Jaren Jackson Jr. fouled out with 2:33 left in regulation.

But the referee’s decision to toss Curry drew ire from the home crowd.

Poole finished with 21 points and Thompson had 24.

The Warriors committed 21 turnovers and sent the Grizzlies to the free throw line 37 times, but they still managed to pull out the win.

The Grizzlies led by as many as 10 points in the fourth quarter, but the Warriors battled back. Curry knocked down a long 2 to tie the game at 113 with 2:18 left in regulation. A Ja Morant turnover put the ball back in Golden State’s hands. Dillon Brooks fouled Curry on a 3. He drained the subsequent three free throws to give Golden State a three-point advantage with just under two minutes to go.

Share
Facebook
Twitter
Pinterest
WhatsApp
Previous article
Emsworth in Bloom has been saved after JJ's and Johnny's Tap Room raised cash with a knees-up
Next article
Man United: Antony a “big plus” vs Forest