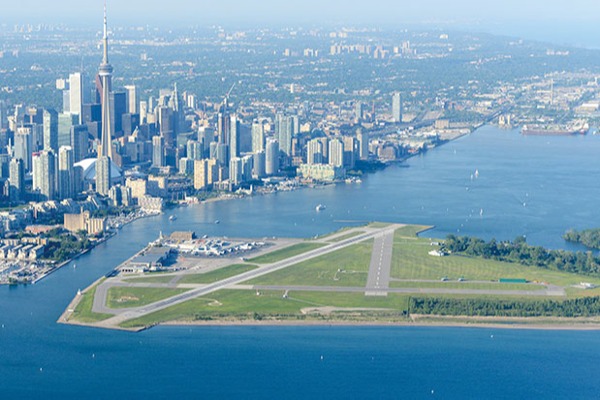 A new report found that city airports — like Billy Bishop Toronto City Airport — support businesses, provide connectivity and unlock opportunities that make a city world class. And they also have a key role in building knowledge economies, playing a critical role in the circulation of people and ideas.

Published by PortsToronto and authored by urbanist and University of Toronto Professor, Dr. Richard Florida, the report – Toronto’s Downtown Airport: A Powerful Economic Asset in the City’s Urban Core – makes it clear that a centrally located, city airport is critical to Toronto’s continued growth and ambitions.

The report comes at a time when both Toronto and its downtown airport are at an inflection point. Both are emerging from the pandemic, and as thought goes into what the needs of Toronto will be in the coming decades, consideration should also be given to the role Billy Bishop Airport can play in building the global city that Toronto aspires to be.

Dr. Richard Florida observed: “Billy Bishop is central to Toronto’s prosperity. It brings tourists and much needed revenue to the city and its urban core, which are still recovering from the pandemic. More importantly, it provides a direct gateway to leading cities such as New York, Washington, D.C., Boston, and Chicago, bolstering Toronto’s role as a global talent and tech hub.”

As well, the report highlights the benefits that Billy Bishop Airport brings to Toronto, which include:

* Providing the city with a unique competitive advantage, placing travellers close to the downtown commercial centre and its cultural amenities — threatened as they are by the shift to remote work and decreased office occupancy.

* Billy Bishop Airport is among the largest providers of good, high-paying blue-collar jobs for city residents and workers – jobs that are otherwise declining and in increasingly short supply. Airports also generate significant demand for local services, which in turn create more and better jobs for lower-paid service workers in surrounding retail establishments, hotels, and office facilities.

* According to a 2022 survey, 85% of Toronto residents “agree” that “Billy Bishop Toronto City Airport is a valuable asset for the entire city.” A majority of Torontonians also agreed that Billy Bishop Airport is a good use of land (82%); that it makes sense to have an airport downtown (85%); and that the airport plays a central role for business, health care, and job creation for the city (78%).

RJ Steenstra, President & CEO PortsToronto, Owner and Operator of Billy Bishop Toronto City Airport, pointed out that: “By all metrics, Billy Bishop Toronto City Airport is an asset and a vital piece of transportation infrastructure that can propel the City of Toronto forward. More specifically, Billy Bishop Airport is a key economic driver; a creator of jobs, a connector of people and businesses; an enabler of tourism; a provider of vital healthcare through Ornge; and a good neighbour, making investments in sustainability and community.”

And Steenstra added: “The City of Toronto is at an inflection point where it needs to shake-off the pandemic declines and re-entrench itself as a world-class city. Billy Bishop Airport is on a similar journey and is eager to work with the City of Toronto and the Federal Government on a future vision for the airport.”

Dr. Florida noted that: “Downtown airports are valuable assets to any city in any part of the world. Toronto is fortunate to have had a downtown airport for the last 80+ years and should be looking at ensuring it is here for the next 80 years or more to support what this city should and can be.”

Neil Pakey, President and CEO, Nieuport Aviation, Billy Bishop Airport Terminal Owner and Operator, said that: “This report confirms that having a downtown airport, with its simple and quick access to everything in Toronto is a competitive advantage that should continue to be celebrated. Now is the time to lock in Billy Bishop Airport’s future as a world-class downtown airport and as a gateway for a world-class city.”

Stephen Lund, CEO, Toronto Global, made it clear that: “The importance of Billy Bishop Airport to the Toronto Region economy and value proposition cannot be overstated.”

Lund continued: “Downtown airports provide cities with unique competitive advantages, enabling connections with other leading global centres and our downtown airport offers unmatched connectivity with the centre of Canada’s business and financial hub. As we compete with cities like New York, London and San Francisco for global talent and high-tech business, air connectivity is a critical part of this equation.”